Thank you for contacting us! If needed, you will hear back within 48-72 hours.

DRAWN TO THE GLOBE
by Chris Duggan Publication Date 23rd April 2016 (Copies available now)
A celebration of Shakespeare on his 400th anniversary and of Shakespeare's Globe Theatre in its 20th year of performance.

Since Shakespeare's Globe Theatre opened with its 'Prologue Season' in 1996 it has been revelatory in our understanding of the world's greatest playwright, offering an authentic experience of what it was to be a 17th century playgoer and showing Elizabethan and Jacobean performance methods in entertaining and critically acclaimed productions.

Mark Rylance, Vanessa Redgrave, Roger Allam and Stephen Fry are among those who have trodden its weather-beaten boards. It has also proved so popular with playgoers and tourists to London's Bankside that they regularly queue for the last tickets to stand in the rain.

Often standing in the rain himself, Chris Duggan has seen all of the Shakespeare productions at the Globe and about 200 of his lively images are included in this entertaining pocket sketchbook size volume. Pictures in pencil, crayon, ink, acrylic, gouache and watercolour of musicians and actors in character who bring alive the Globe’s stage, alongside quotes from the plays and comments on the peculiarities of this unique venue.

“...reminiscent of the furious energy of the Globe...We have been very lucky in our recorder.”

ABOUT CHRIS DUGGAN
Chris Duggan's pictures have appeared in many publications from Vogue to Punch, where for a time he was the cinema artist. He has worked for the Independent, Telegraph, FT, and is currently Business Cartoonist at The Times.

Some of his pictures are in the collections of The British Cartoon Archive, Bank of England Archive and Archer Political Cartoon Collection and he is a regular contributor to The Political Cartoon of the Year.

He has illustrated several books including The Ascent of Rum Doodle (Arrow), Hic! The Entire History of Wine (Vinum Bonum) and The Battle of the Colours (Finks Publishing). 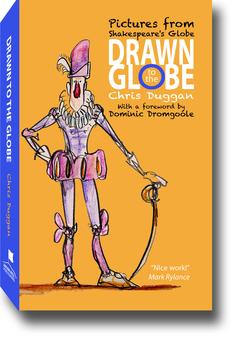 PRESS PLEASE USE THIS FORM TO REQUEST HIGH RES. ARTWORK & REVIEW COPIES AND FOR BOOKSHOP ORDERS OR CONTACT ME AS ABOVE.

PLEASE USE THE FORM BELOW

​TO REQUEST HIGH RES. ARTWORK & REVIEW COPIES AND FOR BOOKSHOP ORDERS OR CONTACT